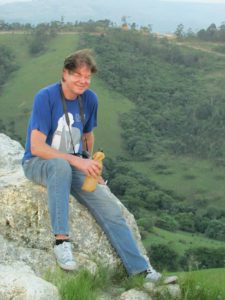 IF anyone deserves the title of resident “Artistic Disruptor” in Eshowe, it is Peter Engblom (left).  His connection with the area goes back several generations, when his Norwegian forebears arrived as missionaries and founded the mission station between Eshowe and Entumeni.

After formal art studies at the Bavarian State Institute in Munich, Peter “took the road less travelled” and has been experimenting with various statements and forms of art ever since.

He is possibly most famous (infamous?) for his collection entitled “Zulu Sushi”, which purports to tell the story of Mpunzi Shezi, the first Zulu missionary to the Japanese. Although much of his photographic work attempts to look as though it was shot “on the fly”, each shot is meticulously planned and several different shots are often fused together in a sort of digital collage – what the artist himself describes as “the Celestine Prophecy meets Mad Magazine”.

He has a gallery at the George Hotel.