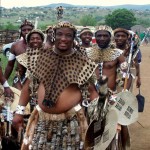 Zulu men at a traditional wedding

Polygamy in the Zulu culture as similar to other cultures like Northern Sotho, Islam and Swazi culture. Men were and are still able to take more than five wives to bear them children.

Zulu families used to choose a husband for the women, in most situations the girl is chosen to marry an older man while she is still young (between age 16 and 25), only to find that she is the fourth or fifth wife of her husband.

The families are the ones who decide on the Lobola (dowry given from the husband to the wife’s father, paid in cattle) and other formalities; they just tell the girl about the final arrangements of the marriage and the day she will be going to live with the husband. 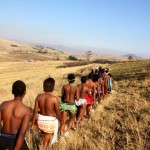 Another reason why the Zulu people take several wives is that a woman without children is looked down upon and loses her position of being a wife in a clan.