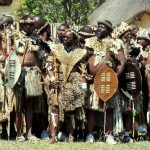 Chieftainship and any position of power in the Zulu tribe, are all based on genealogy. The eldest or favourite son becomes the heir to the throne or becomes chief. The head of the tribe acts as an arbitrator in any minor disputes. If need be, they would be referred to the ‘induna’ who has a seat in the Royal Parliament. The Zulu Supreme Court of Justice presided above all of the ‘izinduna’.

Nowadays the Zulu are officially ruled by the government of South Africa, but still refer matters to their tribal authorities. At present, the Zulu king is King Goodwill Zwelithini and the political leader is Mangosuthu Buthelezi, who is also the head of the Inkatha Freedom Party (IFP).

His Majesty King Goodwill Zwelithini became king after the death of his father, His late Majesty King Cyprian Bhekuzulu kaSolomonm in 1968. HRH Prince Israel Mcwayizeni KaSolomon acted as the regent 1968-1971 while the King took refuge in St Helena for three years to avoid assassination. After his 21st birthday and his marriage, Zwelithini was installed as the eighth Monarch of the Zulus at a traditional ceremony at Nongoma on 3 December 1971, attended by over 20,000 people.