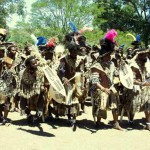 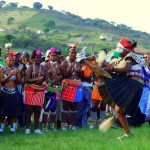 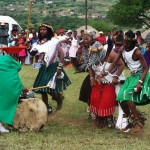 It is customary that unmarried and young men dance, alternating in separate groups, occasionally the married women and men break in and join the festivities. Married women utter a quavering shrill (ukukikiza). When the young women (izintombi) dance, the young men clap and play the drum and vice versa.

This is a dance performed by boys and girls without drums and accompanied by a chant. The girls wear woolen skirts and are usually bare-chested. They also wear rattles made of seedpods around the ankles to accent the high kicks.

The Ingoma is one of the purest remnants of Zulu tradition. Boys and girls perform the dance for transition ceremonies such as coming of age, weddings. In the past it was performed before a hunt as well as before battle. For the youth it instils the tradition of sharing experiences and building solidarity through communal dance.

A harmonising performance with boys and girls together but dancing separately. The boys clap while the girls dance and vice-versa.

This traditional dance is most often associated with Zulu culture. It is performed with drums and full traditional attire and is derived from the war dances of the warriors.

This war dance is untouched by Western influence probably because it is regarded as a touchstone of Zulu identity. Full regimental attire, precise timing and uncompromised posture are required. It is danced by men of any age wearing skins (amabeshu), headrings, ceremonial belts, ankle rattles, shields and weapons like knobkerries and spears. While indlamu uses similar steps as girls do for ingoma, it has a much more calculated, less frantic feel, showing off muscular strength and control of the weapons with mock stabs at imaginary enemies. Dancers are more likely to make eye contact with the audience. Various drums and whistles accompany the dance.

Dress is determined by age, rank and gender. Young ones do not cover their thighs, but adults should. Men wear amabeshu and women wear leather skirts and beaded aprons. A leather skirt worn by a women is connected with being pregnant or a desire to be pregnant. Over that she wears beaded aprons, presented on her wedding day by her father. Colours in the aprons can signify where the dancer comes from. Girls’ beadwork girdles are called ‘isigege’ and should not contain red beads as these are reserved for married women.

This is performed by men or boys standing in a straight line or arc. The music is balladic and the lyrics pertain to modern issues but use ancient melodies. Issues like aids, crime and migrant labour. The lead singer provides the counterpoint or rhythm. The music form symbolises life in rural Zululand and the townships. This dance has become internationally known.

There are special wedding songs and dances called ‘umBholoho’ and form a structured ritual to channel mutual antagonism between families of the bride and groom. Families take turns to outdo each other in beautiful dancing and song.